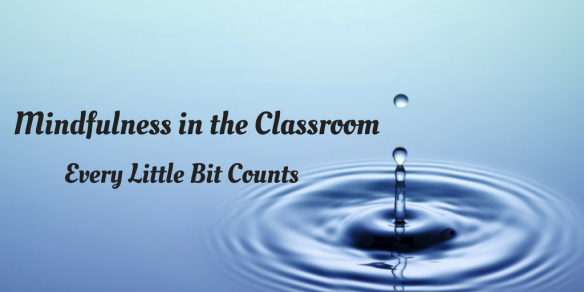 This past week has been a busy one for many Primary schools across England. It is collectively known as SATs (Standard Assessment Tests) Week for Year 6 children. The instructions for giving the tests are strict and must be given at specific times on specific days. Over a period of four days they take six different tests. Anyone who works in a primary school or is a parent of a Year 6 child, will know about the overwhelming stress that this puts on the children; particularly as they have become much harder over the last few years.

This year has been no different, except that I felt helpless with supporting the Year 6 children at my new school. The tests were scheduled for my third week of school! The school had not been teaching any of the strategies for mindfulness and it made me sad that I may not be able to help this group of children properly prepare themselves mentally to face the challenges the tests would present.

After some discussion with the class teacher, I decided to teach the children a few basic mindfulness strategies.

First, we discussed how they were feeling about the tests, considering the emotions that were attached to these feelings and how our body responds. Of course, what they told me was of no surprise; nervous, scared and anxious. We discussed how this was normal and then I explained what was happening in their body with the brain triggering stress hormones to set off the primitive “fight or flight” response. I then asked them if they would like to trick their mind and body into believing it was clam. They whole heartedly agreed.

We discussed three basic strategies:
(Click on each strategy to take you to details of the strategy.)

1- Basic Deep Mindful Breathing– Including the One Minute Meditation
2- Starfish Meditation– To support those more active and sensory based children
3- Guided Meditation, particularly Visualisation- We used The Magic Shell Meditation in full and used their “magic shells” each day of testing to hold on to their worries and concerns during the testing so the wouldn’t bother them.

During the testing week, in the morning before the tests began, I spent time on the first two days of the tests with the class, supporting them through some breathing and visualisation exercises they had learned. On day three and four, I was unable to do this because Ofsted (Office for Standards in Education, Children’s Services and Skills) decided it was time to inspect the school (In my third week at the school! This is were my own mindfulness was significantly used and is featured HERE.). However, the staff had paid close attention to my modelling and continued to use the strategies with the children the last two mornings.

The result?
I will let the children explain. (I received these letters and cards.) 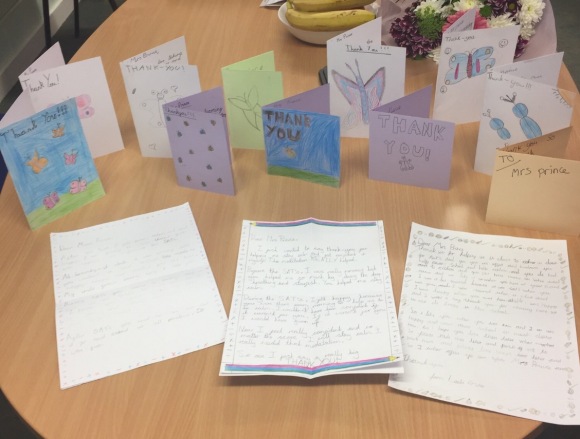 Will this positively impact on their final results? I am not sure. It was only a few weeks. But, I do know that they have quickly learned a life long skill that has supported their mental health and well-being this past week and, with that success, many will continue to use the strategies as they move into secondary school.

3 thoughts on “Mindfulness in the Classroom- Every Little Bit Counts”